I hope this this note finds you well and that this has been a happy and successful week. Here on the Camino, time is both fast and slow as we walk in, and toward, our objective. I say “walk in,” because I have discovered over the past two weeks of walking on the Camino through beautiful country and with authentic people, that the objective is not just to reach Santiago…the Way is as important as the destination. While no revelation for many of you, this was an important lesson for me to learn, to really feel and understand in my soul, that there is no there there. I know that when I reach Santiago I will feel a rush of emotions — joy, sadness, a sense of accomplishment and maybe even relief, awe, humility, gratitude, longing, reflective the list goes on — yet what the Camino has taught me is that this isn’t the end, but rather another moment on the time-space continuum. A moment to reflect on life and all of the wonderful things in it, moment to love and to be loved, and a moment to give thanks for all of the blessings in my life. The Camino is a great teacher, and I hope that as my life goes on, I will bring those teachings with me into whatever I do or wherever I go next. James Taylor said it best when he said that, “the secret of life is enjoying the passing of time, there ain’t nothin’ to it, anyone can do it,” and that, my dear friends and family, is what I think the lesson of the Camino is for today.

Today started out with a lovely but simple breakfast that Carmen had prepared. If you recall, Carmen Alvarez is the great granddaughter living in Casa Ferreira, the caregiver of the place, her parents and the school children she teaches in Oviedo during the “offseason” (not Camino season). As I walked down the stairs from my room, bleary-eyed and still waking up, this is the setting and breakfast in front of me: 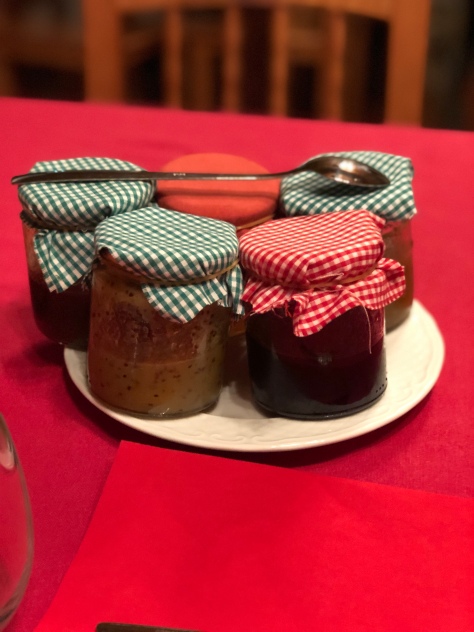 The breakfast was homemade bread and cake, homemade jam (5 flavors: blueberry, blackberry, raspberry, Peach and kiwi), fresh-squeezed orange juice and coffee con leche. Are you kidding me?! When does she find the time to make all of this wonderful food?

After breakfast, I headed off for A Fonsagrada, on what I was told would be a difficult day. I had no idea what that meant but it proved to be the toughest (hiking) day on the Camino so far. Fortunately, my friends from Italy asked if I would like to hike with them, so after they snapped a selfie with Carmen and I, we headed up the hill. 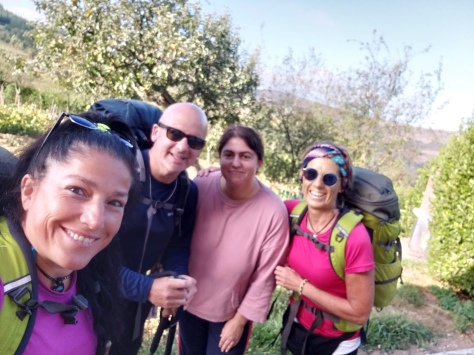 I say hill but these were fairly steep and very continuous climbs up the side of the mountain. We climbed over 750 meters as we wound our way up to near where the windmills were on the ridge. I don’t have many snapshots as my head was down working, but here are a few for you: 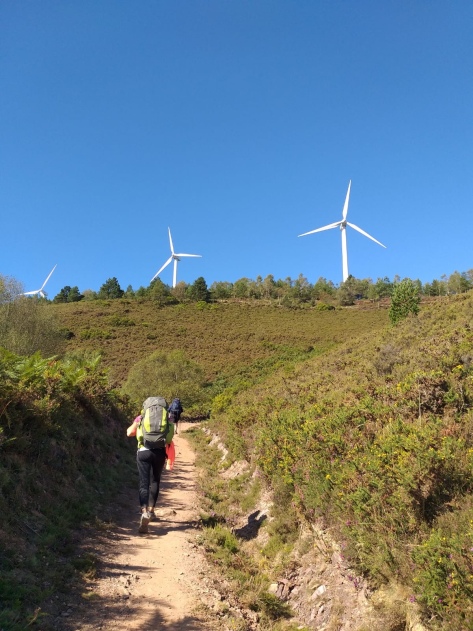 A bit further on the trail we came to the border between the autonomous region of Asturias (the one we had been in since Oviedo), and the autonomous region of Galicia. This was both a sad moment and a happy one, as I was sad to be leaving Asturias and the warmth of its people, the depth of its charm and the taste of its food (fabada is unbelievable), but I was happy to be entering the region and where Santiago was to be found. It was a beautiful moment in time, with one foot in the past (Asturias) and one foot in the future (Galicia). 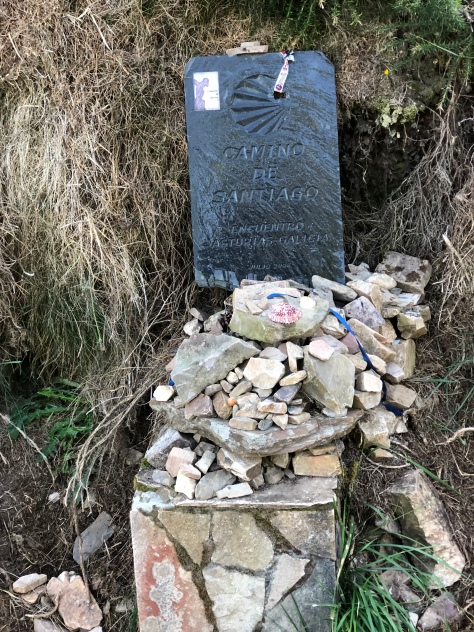 After walking and climbing for the rest of the afternoon, the final two kilometers in the earl evening into A Fonsagrada were incredibly steep and a real challenge for all of us. By this time, we had been joined by Don and Jackie from Texas and a whole hoard of Italian climbers (young) and a Spanish couple, Alberto and Esperanza (remember from Sumblismo?) In an case, it took everything we had to make it up that last bit of the trail to town.

A Fonsagrada was an interesting town to visit. The town has a population of around 3,600 people and is at an elevation of ~3200 feet (we started the day in Castro under 1000 feet). The parish church in town is dedicated to Mary and has a cute little pilgrim office attached to it, run by volunteers and the local priest.

A Fonsagrada parish church and pilgrim office (small stone building). I stayed in a private aubergue where most of our entire cohort that had left from Oviedo roughly at the same time stayed (right down that side street from the church).

The church itself was simple yet beautiful, and one of my favorite so far because of the warmth of the priest. Here are just a couple of photos of the inside of the church to give a feeling for it. I lit that candle for peace. 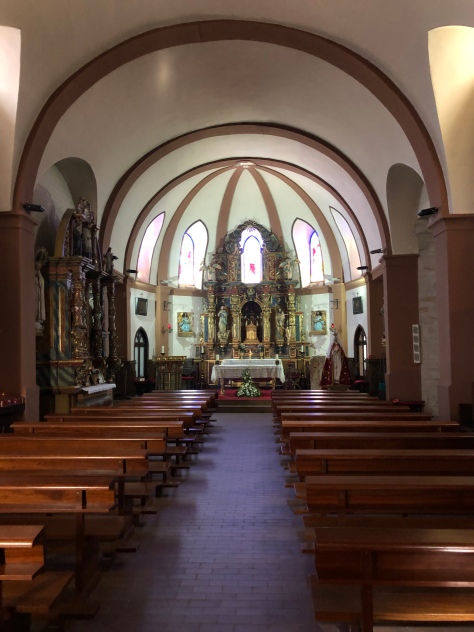 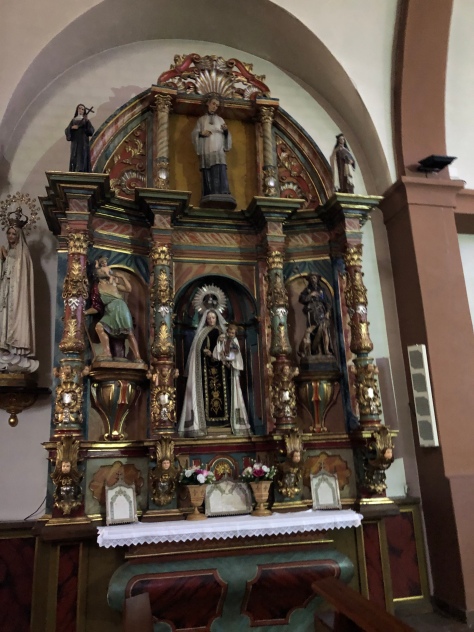 At 8 o’clock we held a “pilgrim mass,” where pilgrims from all nations came together for a few Bible readings (read by pilgrims in English), a short sermon was given by the priest (in Spanish), communion was offered, and then one of the most special moments on the Camino was the special “pilgrim’s blessing.” The priest invited us all up onto the platform where he stood, and handed out a booklet with the prayer in it. He then told us that each language would read a stanza in the prayer, starting with English and followed by German, Italian, Portuguese and Spanish. It was absolutely touching the way he brought all of us into the mass in this way. I don’t have any pictures of this ceremony of course, but I did take some snaps of the prayer booklet after if you would like to read it:

I felt so blessed to be on the Camino and in that moment…I will never forget it.

Now that my soul had been nourished it was time to get some of the food that Galicia is famous for: pulpo (octopus). Several of us went together to eat at Pulpeira Caldeira and we were not disappointed! In a word, the pulpo was amazing, seasoned with olive oil and some spicy red salt…my mouth is watering writing this!

And look how when I poured the olive oil onto my plate it looked like a pilgrim’s foot! This was indeed a special meal.

And just when I thought to myself that this evening couldn’t be an better, I discovered that there was a fair in town (A Fonsagrada is famous for it’s fairs), called the Fair of the Horses. Our first hint that there was something special gong on today was the dancing outside of the church before and during our mass:

The second hint that something fun (and a little crazy) was going on was the light show and people in the street:

And the third hint we got was the setup of a fairly substantial stage where the traditional dancers had been performing. This led to an all out dance party until 4 or 5 am!! Young and old came out for the festivities, and the place was filled with pilgrims as well. It was a night never to be forgotten: 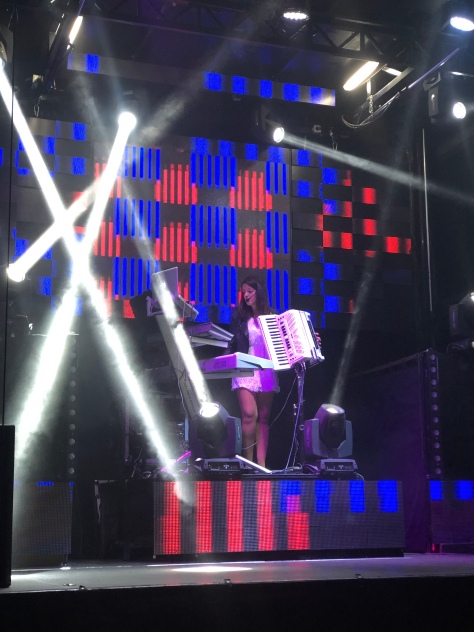 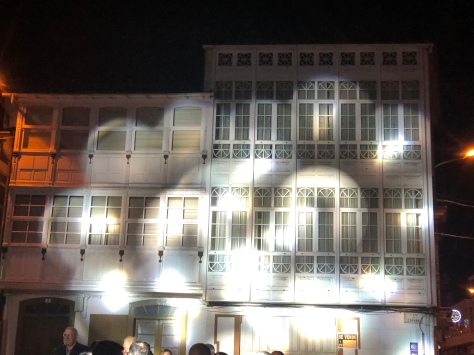 We all danced with each other and the locals, and at around midnight the performer (she was a one woman band!) played Desposito after which I decided to call it a night.

As I said, the evening went on until early into the next morning, but fortunately I was so tired I didn’t care and drifted off with a big smile on my face and into a deep sleep, the best sleep on the Camino thus far.

5 thoughts on “Castro to A Fonsagrada: moments to cherish”

Exploring, discovering and learning about the world